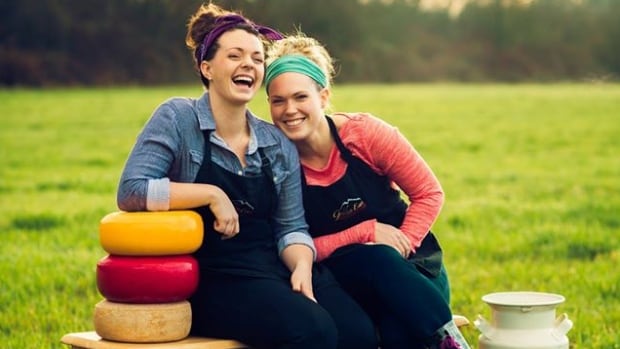 Maple Ridge sisters Emma and Jenna Davison run Golden Ears Cheesecrafters on their family’s farm, which dates back to 1902. (facebook.com/GoldenEarsCheesecrafters)

In fact, the dairy in the products from Golden Ears Cheesecrafters in Maple Ridge is very local — they use the high-fat milk produced by their uncle’s jersey cows.

Emma and Jenna Davison decided to start making cheese after their mother suggested they do something that would add value to their uncle’s dairy farm. “My sister and I, we are the fifth generation coming down from that farming family,” Emma said, adding that starting the cheese business was a way to extend that legacy.

“We want to be a part of the centuries to come and what there used to be here from the land we originally started with.”

Golden Ears Cheesecrafters also has a retail store and bistro on the Maple Ridge farm along with the production facility.

The Davisons get their milk for their cheeses from approximately 500 jersey cows that graze on their family’s farmland.

“It’s about a five per cent milk fat, which is much higher than that classic Holstein cow, that black and white cow, so we have that high fat content and that’s perfect for making cheese, because we don’t have alter anything,” Jenna said.

“So as soon as that milk comes in we can pasteurize it and we’re making or brie, our jersey blue, or neufchatel. Anything with a clean high-fat content, that’s that milk right there.” Some of the cheeses on sale at the Golden Ears Cheesecrafters retail store in Maple Ridge. (Sheila Peacock/CBC)

They also treat their cows very well: “They get more vacation time than we do,” Jenna laughs.

Periodically, the Davisons send their cows over to their hundred-acre farm on Gabriola Island near Nanaimo, where the animals can enjoy an “oceanfront holiday.”

Jenna said this gives the cows an opportunity to graze and rest when they’re dry, and is also a place for the cows to have their pregnancies.

“Then they come back and get re-introduced to the system when they’re ready.”

Jenna, who has a background in agriculture and studied under a well-known cheese-maker in Aggasiz, handles the production side of the business.

Her sister Emma studied business and manages the front-end of Golden Ears Cheesecrafters.

She said she has a particular passion for encouraging people to eat local and to know their food sources  — one reason why their Maple Ridge facility has a window where people can actually watch the cheesemakers making the cheese.

“My passion definitely lies with local food, encouraging people to ask questions, find out what they’re eating —what’s it it [and] where does it come from, what do you feed the animal that’s producing it.”

To hear the full interview with the Davisons listen to the audio labelled: Fraser Valley sisters use family’s century-old farm to create artisan cheeses